In my day, it was Space Invaders, Asteroids and Breakout. My friends and I would hang out on lazy summer days and between MTV and video games, we filled our time. That is, until we got bored and went outside to enjoy the sunshine. These days, kids aren’t about to roam about neighborhoods freely, ride bicycles unsupervised or round up a bunch of kids for an impromptu game of baseball.  Instead, playdates are organized, sports are supervised, and kids only explore the outdoors with an adult. Parents decided the world was not safe for kids, so what are they to do with their free time? Why, they play video games, of course!

Video games make up the fastest growing segment of the entire $1.5 trillion global media and entertainment industry. Worldwide gaming revenue rose by 11% last year and this growth trajectory has the potential to continue as interactive gaming grows into a popular form of mainstream entertainment.

But, contrary to what you may think, the gaming world is no longer limited to teenagers playing in the basement or den. In fact, you may be surprised to learn that the average gamer in the U.S. today is thirty-three years old and nearly half (46%) are women! Every second, over five thousand apps are downloaded on a mobile device worldwide, and many of them are games which means gaming is now big business.  Indeed, you may have heard of Kyle Giersdorf, the 16-year old gamer who won $3 million at the first-ever World Fornite Cup in July. Kyle wasn’t the only winner at this event. Epic Games handed out $30 million in prizes and several teenagers became instant millionaires.

Undeniably, gaming has garnered the attention and interest from people all over the world. If you don’t believe me, just look at the numbers. More than 164 million adults play video games in the U.S. alone (and that number is expected to grow to over 200 million by 2020)! Now, for the record, I’m not one of them. I must admit, I can’t keep up with the games these days, however, the Entertainment Software Association says Americans spent about $43 billion on game-related purchases last year, rising from $36 billion in 2017.  So certainly, mobile gaming is hot, as highlighted by the chart  below provided by Capital Research Group. U.S. adults spend an average of 23 minutes a day playing mobile games. If you’ve played Angry Birds, Sims or Labyrinth you may be a gamer. 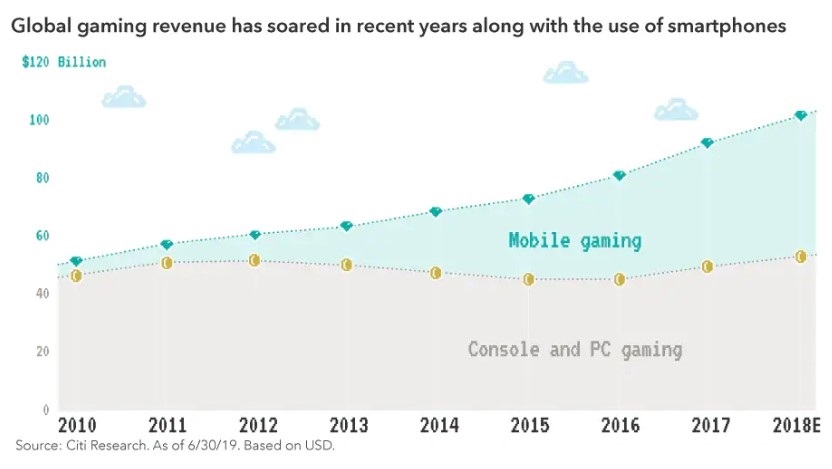 Of no surprise, China is the world’s fastest growing video game market with over a half a billion gamers, and nearly all of them (95%) are playing on mobile devices, according to a study by Niko Partners. So, the industry seems to be ditching consoles as software sales is taking the lead. With over five billion mobile phone users around the world and more market share growing by the day, interactive entertainment stands today as the most influential form of entertainment. It is predicted the total number of mobile gamers will come to 2.7 billion by next year.

If you haven’t heard of eSports yet, you surely will because there are more people watching eSports than those who watch the Super Bowl. That’s because the world of competitive video gaming is a fast-growing international phenomenon with millions of fans and billions of dollars up for grabs. Streaming services and live events have turned casual gamers into serious stars who can sometimes rake in seven-figure earnings and massive brand endorsements. eSports describes the world of competitive, organized video gaming. Competitors from different leagues or teams face off in the same games that are popular with at-home gamers like Fortnite, League of Legends, Counter-Strike, or even Madden NFL. These gamers are watched and followed by millions of fans all over the world, including those who attend live events or tune in online. Streaming services allow viewers to watch as their favorite gamers play in real time, and this is where popular gamers build up their fandoms. You can see in the chart below, also provided by Capital Research Group, eSports viewership is on the rise. 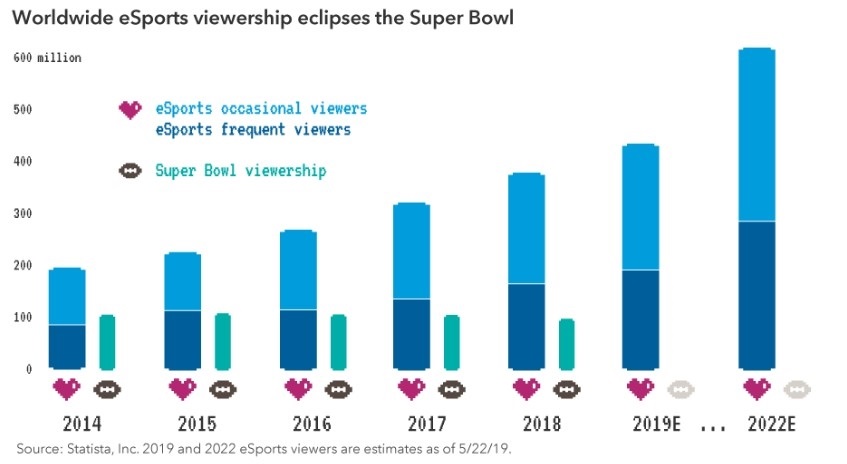 ‘Tis the sign of the times when the most popular video games are generating substantially more revenue than Academy Award-winning movies and hit songs. Earlier this year, the video game Grand Theft Auto V became the highest-grossing entertainment product of all time, selling more than 90 million copies and generating about $6 billion in revenue. Comparatively, the highest grossing movie of all time, “Avengers: Endgame,” has earned roughly $2.79 billion worldwide since it was released in April 2019. Prior to that, 2009’s “Avatar” held the record at $2.78 billion.

Video games are highly interactive, compared to passively watching a movie. As a player, your participation changes the content and that makes it a much more immersive and powerful experience than a movie or music. As a global industry, gaming companies can be found throughout the world. From game console-makers such as Microsoft (Xbox) and Sony (PlayStation), to game developers and publishers such as Activision, Electronic Arts and Take-Two Interactive and some companies doing both, it’s a lucrative market for the video game producers, the players themselves, and for brands.

Tencent is a giant technology conglomerate and by far the largest gaming company in the world, with a 40% state in Epic Games, the maker of Fortnite, the most profitable and successful “free” video game of all time. Microsoft is the largest gaming company in the U.S. primarily due to its Xbox console, but Sony is a competitive rival with Playstation and Nintendo with Switch. Microsoft may have a lead and is planning to launch a cloud-based service dubbed the “Netflix of gaming.” Of course, there are several competitors including Amazon and Google who also see the future of gaming transitioning into a Netflix-style streaming service. As companies move away from the high-powered, expensive box sitting underneath your TV, many players are gaining ground in the gaming marketspace. Located right here in our backyard is one of the world’s largest video game publishers, Activision based in Santa Monica.

Gaming is a Fast-Growing Industry

Without a doubt, gaming is a fast-growing industry and smartphones are enabling a new generation of gamers around the world to participate. Leading companies are putting a focus on internet streaming and free-to-play games which makes money off of micro-transactions. These are the little things you might pay for within a game to either enhance your experience or make you a better, more competitive player. Let's say your adult son or daughter comes over for dinner and shows you this new free game where the object is to make a really good mixed drink. (After all, it’s always 5 o’clock somewhere, right?).  You download the game for free, and for that you can access a free bevy of inexpensive well liquors. But you quickly learn that if you pay $3 you're able to use top-shelf brands or exotic juices to flavor your drinks. Being the competitive person that you are, (and knowing this will give you an edge to beat your son or daughter), you pay for the upgrade. And that means you're probably staying around for longer, maybe even having a real drink while you compete. Sound like a night of fun?

Well, even if it’s not for you, gaming is no kids-game. Pokémon Go made over $2.5 billion worldwide as kids, teens, and adults let their cellphone’s GPS tracking lead them to locations around the world to seek, capture and battle Pokemon’s (which, of course, appeared as if they were in the player's real-world location). Win or lose, these games are shaping cultures and driving technology.

Content in this material is for general information only and not intended to provide any specific advice or recommendations for any individual.