Uncertainty is a part of investing, but today doubts are elevated as the Wall Street Journal reports “nervous investors have socked away $3.4 trillion in cash.” Despite these growing concerns about the economy, the S&P 500 Index is up almost 25% year-to-date on a total return basis.  While exciting, the S&P 500 current P/E (price to earnings) ratio is 22.91, which is a range that, at least based on history, often indicates the market is at or near the peak of the cycle. In 2008, for instance, when the stock market peaked before the housing bust the S&P P/E ratio was 21.46. Of course, the dot com boom of the 1990s pushed valuations to unprecedented levels, with the P/E exceeding 32 so it’s difficult to say how much longer this can go on based on valuations alone. What we do know that is quite clear is that the market is not cheap.

When companies like Nike is trading at 33.5 times earnings, or Costco is priced at 36 times earnings and Coca-Cola has a P/E of 28.86, it’s hard to imagine prices can go higher unless we see strong earnings. We now have Q3 results from 341 S&P 500 members that account for 76.5% of the index’s total market capitalization. Total earnings, or aggregate net income reported for these 341 index members are -0.6% from the same period last year. In other words, earnings are down.

The Fact Remains: Earnings Have Fallen Year Over Year

Granted, earnings expectations were low for this quarter, which explains why the market is rallying. So far, 73.9% of S&P 500 companies have beat earnings estimates. In other words, the market sees that bad isn’t as bad as it seems. Taking a step back from the positive spin, the fact remains: Earnings have fallen year over year. So, the real question we ought to be asking is, is a decline in earnings a sign of concern?

Often you will find a disconnect in the market between negative news and positive news. If expectations are high, even good news can lead to a market decline when the results are not as good as expected. While it may not make sense, keep in mind the market focuses on the short-term whereas most of us live as investors in the long-term world. Suppose the market expects 235,000 jobs for the month and we learn we grew by only 200,000 jobs. The stock market might fall on this news because the results were less than expected. Nonetheless, in this example, 200,000 new jobs added to the economy is typically an indicator of a healthy economy.

Likewise, when expectations are low, even bad news can trigger a market rally. If the market expected a loss of 50,000 jobs and, instead, we only lost 25,000, the market may see this as a positive sign and go up on this news, even though job losses are not a sign of a healthy economy. In other words, in the short-term it’s not as much about the news itself but rather how it differs from expectations. If it isn’t as bad as it seems, it’s often viewed as good news. But it is important for investors to look behind the curtain because for most of us, financial security depends on looking out beyond today’s headlines.

For the Tech sector, we now have Q3 results from 83% of the sector’s total market cap in the S&P 500 index. Total earnings for these Tech companies are -6.4%, even though, 82.5% beat estimates.  Clearly, expectations were low. So is it better now because the quarter wasn’t as bad as expected, or is negative earnings something we ought to pay attention to?

The U.S. Consumer is Spending

Of course, there is an ongoing debate over the U.S. economy’s future path and direction. Let’s take a look at some of the factors favoring further growth, as well as some of the warning signs we may want to take heed to. U.S. consumers have been the primary driver of the economy for 2019, which is a good sign. Since the 2008 financial crisis, consumer spending has not been as strong as historical averages coming out of recessions. Since consumer spending typically drives about 60% to 70% of a healthy economy, this has been the missing link to ensure sustainability of the expansion. But there are two other pillars that are important to the overall economy – business spending and government spending. Government spending is typically not as significant except during periods of economic contraction. When corporations and consumers aren’t spending, the government can stimulate growth by injecting capital into the markets. We saw aggressive government spending during the Great Depression, with roads and bridges built sometimes that seem to have led nowhere, all in the name of getting workers jobs and collecting paychecks.  We also saw aggressive government action during the financial crisis.

But business investment is the driver of longer-term growth. Consumers can change spending habits swiftly, however, corporate spending is generally a bigger train to slow down because of the size and scale of the projects. Building a factory, for example, or purchasing new equipment requires a significant commitment of corporate resources and time.  And what we know to be true is business investment has stalled and manufacturing remains weak from the ongoing U.S.-China trade dispute. And, as already noted, we have seen a stall in corporate earnings growth. The consumer depends upon a strong, vibrant corporate profit environment for continued hiring and wage gains. Yet, job and wage growth has also slowed this year. Wages rose just 2.9% for the year, the lowest increase since July 2018. And job growth has slowed from 312,000 new jobs added in January to 128,000 in October, according to the Bureau of Labor Statistics. It is reported that year-over-year job growth occurred in food services and drinking places, social assistance and financial activities (which mostly included jobs related to credit intermediation which makes me scratch my head and the hot real estate market). The Federal government and manufacturing sector lost jobs. The chart shows the differential between this October and last October as shaded in blue and gray. Notice the manufacturing sector was down substantially. Of course, the U.S. is primarily a service economy, but this is still a significant decline that we probably ought not ignore. Manufacturing firms recorded a ninth successive month of declining production, and while service sector companies are showing growth, we are seeing the second-weakest pace since January. 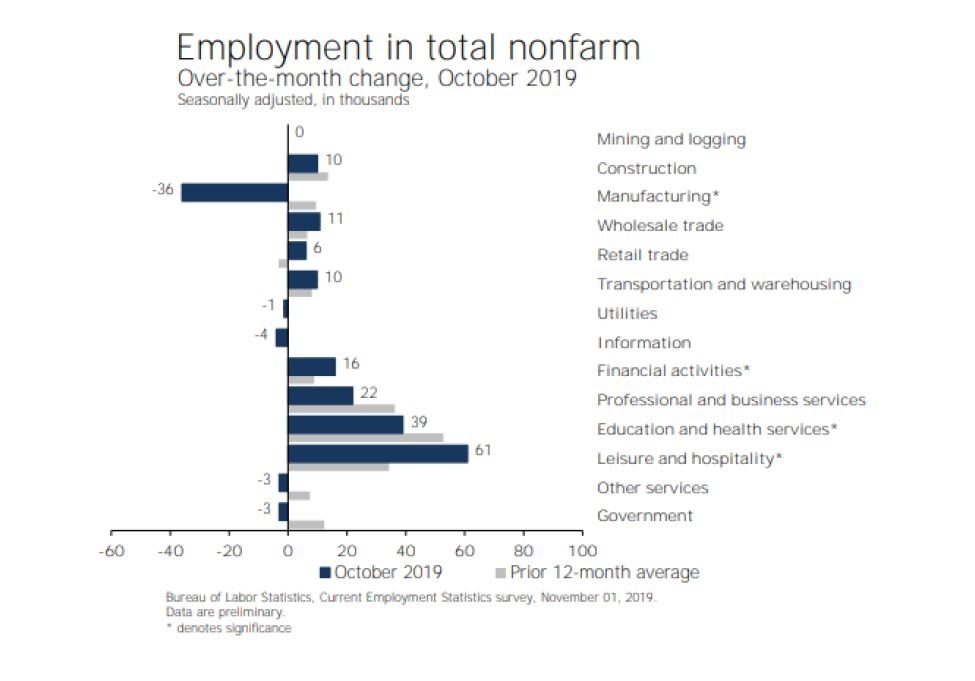 A report the National League of Cities sites that 63% of finance officers from 554 major U.S. cities with populations over 10,000 predict a recession next year. They say falling city revenues, rising expenditures, softening business investment, and an expensive housing market is the basis for concern.  Cities do fiscal reporting on a yearly basis, meaning that there’s about an 18 to 24 month lag for economic shifts to show up on city ledgers. Regardless, the softening trend is already well underway, which is why the Feds have lowered interest rates. The 10-year U.S. Treasury declined from a peak of 3.24% in November 2018 to a low of 1.46% in September 2019. This has helping to reduce mortgage rates and support better housing data and trends.

And while the City Fiscal Conditions Report gives an indication the economy is slowing, this merely confirms something we already know. The question is whether this trend is properly reflected in the market. Given the negative expectations around corporate earnings coming into the third quarter, what we’re seeing today are earnings surprises – which is helping push the market to new highs. But it doesn’t give us insight into future earnings. A report on U.S. cities’ fiscal conditions can help us take the pulse of the U.S. economy, but it does not help us forecast corporate earnings looking out over the next six to twelve months. In terms of portfolio management, it is not enough to determine what is happening from an economic standpoint – investors need to determine what the market expects to happen and whether those expectations are being met.

The question may ultimately be whether the weakness in the manufacturing sector affects the consumer.  A deceleration in consumer spending could be the defining factor for 2020 and given that we are fast approaching the most important time for retail sales with holiday spending, estimates also have shifted lower as many retail companies have reduced expectations.

The good news is revenues are still growing, even if at a slower rate than previous years. In the previous recession, revenues were declining for almost two years before the recession took hold, which may or may not be relevant to today’s cycle. What I think is important is that some of the softer economic data we’re seeing, and particularly in business spending is tied to policy uncertainty (particularly with trade and tariffs). If some of the pressure gets released over time with movement towards a deal, or perhaps even the eventual signing of a deal, we certainly could see these trends reversing.

So, what does this all mean for investors? Equity markets continue to set new highs even as investors have remained underweighted in stocks and conservatively positioned. Overall investor sentiment has remained somewhat bearish as outflows from U.S. equity funds are on pace for the second largest year in the past 15 years, already topping $100 billion year to date. In contrast, U.S. bond funds and money market funds have seen record inflows this year. Corporations are also slowing their recent strong stock buyback activity. Buybacks fell 7% during the first half of this year, and new authorizations to purchase shares have declined 15-20%. Yet the market is on track for one of its best years.

So, this tepid positioning could lead to capital flooding back into markets if conditions improve, and thus, may be viewed as a positive indicator. However, we cannot ignore the fact the market is hitting new highs at the same time economic signals are showing weakness. The Fed’s wouldn’t be cutting interest rates if the economy was firing on all cylinders. And with over 30 years of carefully tracking markets and investor behavior, experience has taught me that this kind of disconnect is often most prevalent when there’s over exuberance than with rationale thinking.

The bottom line is that I do not believe that the next six months will bring the end of this expansion cycle and progress with trade talks could be meaningful to the markets. But perhaps too much of our near-future depends on politics and the U.S. consumer. We know the consumer can be quite fickle. And we’ve been waiting for the trade dispute to end for over two years. Ultimately, we need to see positive signs of economic growth and a lift in corporate earnings to keep this expansion going. Is the Fed rate cut enough to inject more steam in the economy? Will a strong holiday season be enough to support growth for 2020?  China may be seemingly motivated to strike a deal with the U.S. to avoid this additional round of tariffs but is this the beginning of the end of the trade wars or just kicking the can down the road? It’s a very unpredictable situation and for these reasons, I will remain cautious but optimistic as we approach the New Year.

If you have any questions or care to discuss your specific situation, please contact me at terri@longevitycapitalmgmt.com.

Content in this material is for general information only and not intended to provide specific advice or recommendations for any individual. All performance referenced is historical and is no guarantee of future results. All indices are unmanaged and may not be invested into directly.

All investing involves risk including loss of principal. No strategy assures success or protects against loss.