The S&P 500 Index rally spurred by hopes of a Federal Reserve (Fed) pivot and better-than-expected earnings has reignited the debate whether a market bottom has already formed, or whether lower lows are still to come. I, along with many economists and strategists from our key investment alliances, believe the bottoming process is not over and will take some time. In this market update, I will explain why we remain cautious. 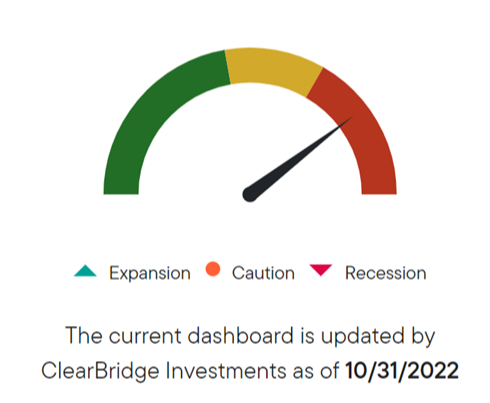 First, it should be clear that countertrend rallies are not uncommon during economic contractions. We experienced seven market rallies during the tech bust, and eight rallies as the market was struggling with the Global Financial Crisis. These rallies can be substantial, with the largest rally gaining over 20% during each of the past two major upsets. The longest rally ran for 4.5 months before it declined again to hit another market bottom. So far, the current bear market has seen five countertrend rallies, with the 17.4% pop over 44 days this summer being the longest and strongest among them.

That said, there are several reasons these countertrend rallies fizzle out and we feel the current rally will ultimately do the same. For one, we believe hopes of an early Fed pivot are overly optimistic. Although the Fed appears poised to begin slowing the pace of rate hikes, cuts are unlikely. After all, any premature U-turn in policy could perpetuate inflation risks, which is top of mind concern for the Fed and households alike. We believe that hopes of a Fed pivot will abate while further recessionary realities will likely set in as we approach the New Year. In other words, the downside risk remains high.

The Fed Fund futures market has priced in 1.9% of additional rate hikes over the next six months. Keep in mind that while the Fed rate rise directly impacts short-term rates, mortgage rates have skyrocketed from a year ago. Last year, new homeowners could get fixed rates as low as 3.25% whereas today mortgage rates are pushing 7%. That means monthly mortgage costs have increased as much as 40% from a year ago. If the rate hikes causes housing prices to drop sharply, it could have a more significant impact on household balance sheets and the economy as a whole. Because of low inventories and housing shortages across the country, we think this scenario is possible but not likely.

That said, recession risks are rising. Although a recession during the third year of the presidential cycle is rare (with none occurring in the post-World War II era), the odds of a recession in the next 12 months are elevated. Notice the ClearBridge Recession Risk Dashboard below which retains its overall red or recessionary signal. 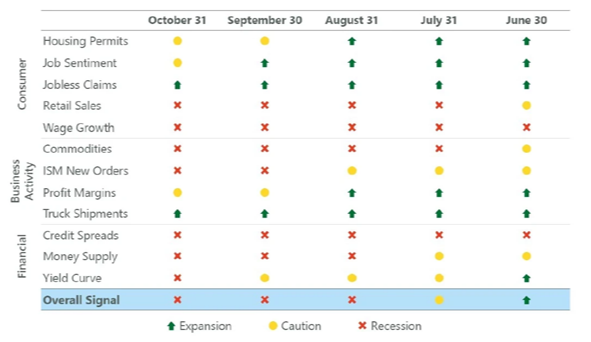 The dashboard saw two signal changes in October, with Job Sentiment turning yellow and the Yield Curve moving to red given the inversion of the 10-year/3-month yield curve. The yield curve has been arguably the most reliable indicator. The past eight recessions have occurred within 5 to 14 months from a yield inversion. This inversion is a sobering economic reality in stark contrast to the recent market optimism. With only two indicators still flashing green, as you can see above, we believe the near-term downside risks remains too high.

Of growing concern is the declining financial health of US households. After the pandemic, U.S. households were flush with cash due to the inability to get out and spend money along with the massive government stimulus. The chart below highlights the jump in personal savings in the months after the pandemic as stimulus money was distributed. However, notice that savings have now gone below where they were before 2020.

Dwindling savings causes growing concerns as layoff pressures are building. Monthly new job postings have plummeted down -30% for the S&P 500 companies, as reported by Bank of America, and it’s not just tech companies laying off. High paying jobs are being lost in financials and communication services as well, according to Bloomberg.

A plummeting savings rate combined with rising debt loads is certainly a cause for concern. According to the Federal Reserve Bank of New York, credit-card balances have risen by 15% year-over-year in Q3 2022, which is the fastest pace of increase in 20+ years. The percent of credit card balances more than 30 days past due also rose.

While we do not think we’ve hit bottom in the equity markets yet, we expect it is more likely that we will see a market bottom within the next three to six months. Don't be surprised if fundamentals deteriorate further. Of course, we will be pursuing opportunities as always, and see areas that could benefit when the economy rebuilds toward the next expansion. In the meantime, investors may have to continue to remain patient. Investors who remain steadfast have historically fared better over the long-term than those who have abandoned quality investment portfolios during periods of uncertainty. Of course, it is a good time to review winners and laggards and be sure to benchmark each investment held for ongoing suitability.

Keep in mind, the current selloff is now 10 months old, and the bottoming process is a bumpy road that typically sees both ups and downs. The average bottom has taken about 16 months post WWII. Meanwhile, we continue to believe that tilts toward defensive sectors and a quality bias will be beneficial for the intermediate term. We also see attractive opportunities in the fixed income and bond markets.

For additional information on recessions, please click here for a valuable ﻿Guide to Recessions from one of our trusted investment firms, the Capital Research Group.

As always, we welcome you contact us at any time to discuss your investment strategy or conduct a complimentary portfolio review.

The S&P 500 Index is a capitalization-weighted index of 500 stocks designed to measure performance of the broad domestic economy through changes in the aggregate market value of 500 stocks representing all major industries.

No strategy assures success or protects against loss.