Turns out, May’s volatility and trade war headlines has not deflated the enthusiasm in the markets, after all. The past two weeks gain of nearly 5% is showing the market’s continued resilience. Of course, with this robust start to the year, any headwind may trigger another retreat. The lack of resolution with the trade wars could be cause for pause. Having said that, one of the most valuable lessons I’ve learned in the past thirty years on Wall Street has been to ignore the noise. I have observed that typically the more we hear about a potential looming crisis the less likely such an event is to occur.

Granted, macroeconomic considerations are important. There is no doubt trade wars impact consumer costs and corporate profitability. The feds have also turned cautious because the economy is showing mixed signs. The job market is healthy but recent reports show some concern, while corporate debt is building.  Of greatest unease, though, is the risk of escalation of the trade wars. It’s fair to say we need to be prepared for more upsets.

The Relationship Between the United States and China has Fundamentally Changed

Clearly, it seems the relationship with China has evolved into one that is increasingly competitive and tense. Chinese stocks and countries that feed raw materials to fuel China’s economy will be impacted by increased tariffs, as will the rest of the global world, including the U.S. At this point, it appears that the two sides are too far apart. While we had hoped for resolution, perhaps neither has yet suffered sufficient economic pain to make any real compromises. Nonetheless, I am confident talks leading to a ceasefire on further tariffs would lift market sentiment, and given the scale of what’s threatened, such progress could have a substantive impact on the outlook for the U.S. and Chinese economies. In the meantime, any escalation in tariffs will likely be felt across the board by manufacturers, distributors, retailers and, in the end, by consumers.

For the U.S., it is difficult to find substitutes for certain products made in China. For instance, if you try to buy toys at your local Walmart, you will find Legos is about the only major toy manufacturer that doesn’t come from China. For China, there is no question that the tariffs have hurt Chinese manufacturers. However, their overall economic growth may not be hampered as much because they have grown to be much more of a service-oriented economy than most may realize. Additionally, China has a lot of levers they can pull, including new stimulus measures, cutting taxes, funding more infrastructure projects and opening credit. China is largely a government-engineered economy so if China’s leaders get concerned about economic growth, they will likely take some or all of these steps. As far as the U.S. is concerned, as you know, the feds suspended interest rate-hikes. If we see some compelling economic data they could be pushed in another direction, including rate cuts. We may get a better feel for monetary policy for the second half of 2019 when the feds meet next week.

Reform is Not Necessarily Bad for China

Taking a step back and looking at the big picture, I think the issues raised in this trade dispute aren’t necessarily bad. It’s been a difficult process, of course, but in the years ahead I believe China’s economy could benefit greatly from the types of reforms being proposed by the United States. Protecting intellectual property rights, for instance, isn’t just about the U.S. It may also be very good for Chinese companies as they increasingly develop their own valuable intellectual property.

China’s economy has grown tremendously over the past three decades, averaging roughly ten percent a year; progress nothing short of amazing. Consider how many products we buy at our local stores that are made in China. Consequently, if the country wants to continue generating strong economic growth and increasing prosperity for their people, they need to work towards honoring their commitments under the WTO and further align their markets with international standards. In the long run, I believe they, the U.S. and the global world will be stronger for it. Thus, negotiations between the U.S. and China are likely to continue to be a big market focus so anticipate elevated market volatility.

That said, keep in mind it is ownership in fundamentally sound companies which drives innovation and produces the kind of long-term results investors need. It certainly takes patience to stay the course, but its has historically proven to work time and time again. Not in all cases, obviously, but consider Apple. When Steve Jobs returned to Apple in 1997, the company wasn’t in very good condition. In fact, Apple had begun to flounder as cheap PCs with Microsoft’s Windows operating system flooded the market. If it wasn’t for Jobs’ vision and innovation, it’s hard to imagine where the company would be today. In 2001, Apple launched the iPod which ultimately changed the future for Apple. Although today we know them for the iPhone, it actually took many years for Apple to dominate the smartphone market. However, a $10,000 investment in Apple at the beginning of 1997 would be worth over $3,000,000 today.

But that wealth could not have been accumulated without enduring quite a bit of pain. The year of iPod’s release, Apple stock fell 37%. If investors had let the stock market determine the fate of the iPod experience, they would have been played a fool. And if that didn’t scare them out of the stock, three years later, in 2000, Apple experienced another dramatic drop which tested investors’ will. Apple shares fell 70% during the dot com bust. I recall how frantic investors were during those days and it would have been easy to lose faith. Still, that initial $10,000 investment in Apple from 1997 would have grown to be worth an impressive $380,000 by the end of 2007 for those who stayed the course. Then, in 2008, history was made with the global financial crisis and by the end of the year, the value of the shares would have plummeted down to a mere $163,000. From personal experience, I know few investors remain confident and calm after experiencing a major loss like that. Of course, hindsight is 20/20. Within a year’s time, the market value would have rebounded and increased to of over $400,000 and from there, Apple’s stock price continued the ascent and in this example, would be worth over three million dollars today.

Apple may be a unique story; after all, over a billion iPhones have been sold since 2007. Certainly, Apple has changed the way we communicate, think and work. So, instead, let’s take a look at a simple company like Coca-Cola. In 1988, Warren Buffett bought Coca-Cola through Berkshire Hathaway with a message to shareholders that they intend on holding the stock “forever.”  A $100,000 investment in Coca-Cola on January 1, 1988 would be valued at over $4 million today. While the growth may have paled compared to Apple, the annual dividends alone today would represent more the original investment. Imagine buying a house for $100,000 in 1988 (which was about the median price in Southern California at that time) and, today, collecting rental income ever year of over $100,000. (Of course, dividends are not guaranteed). But, then again, perhaps Coca-Cola is an incomparable story since much of the world is addicted to sugary drinks. Buffet himself is said to drink five cokes a day.

So, instead, let’s look at a seemingly unexciting company like American Express.  American Express has a history that goes back to 1850. Incidentally, they introduced the first pension in the United States in 1875 because they wanted to provide a graceful transition of an aging workforce - an example of progressive thinking. American Express, you may be surprised to learn, was founded by Henry Wells and William Fargo. One might assume an old company like this to be innovation-deficient and may have little to offer growth-oriented shareholders.

Let me compare their story to one that’s easy understand. As you may know, many investors today kick themselves for not investing in real estate after the housing bust. Of course, the media forecasted housing prices to be depressed for many years, possibly even decades, so it would have been easy to miss the opportunity. I did some research and according to Zillow, housing prices in Thousand Oaks, California fell to their lowest level in January 2012, where the median home price was $479,000. Today, according to Zillow, the median home price is $734,000.

Within the same time period, by comparison, $479,000 worth of American Express would be valued at over $1.3 million today. This, despite the fact that in 2015, the stock price fell nearly twenty-five percent, falling over $200,000 in one year with this example. Those who were unable to stay the course would have missed out on over $550,000 in gains over the next three and a half years. (Ending 4/30/19).

It is important to know I share these stories not because I am recommending an investment in these companies. I have no opinion or comment as to the valuation and opportunities with these stocks. If you care to discuss potential opportunities, please contact me to review your specific situation including your risk tolerance. The point is that behind every company, or behind a portfolio of companies held in a stock mutual fund or ETF are stories. While not all companies are able to stand the test of time, and not all will rise to the levels of those highlighted here, the opportunities to participate in growth, innovation and progress does not happen with get-rich-quick schemes nor do they occur without enduring set-backs.

Everything You’ve Ever Wanted is On the Other Side of Fear. – George Addair

Thomas Edison made 1,000 unsuccessful attempts at inventing the light bulb. Henry Ford failed five times before he succeeded. Walt Disney was fired for having “no good ideas.” Most entrepreneurs have stories of failure. The difference between those who succeed and those who don’t is usually a matter of perseverance. Likewise, there is a big difference between market returns and investor returns. That difference largely has to with a lack of patience. According to Dalbar, the average holding period of an equity mutual fund is 3.3 years; hardly sufficient time to enjoy the historical average market returns. 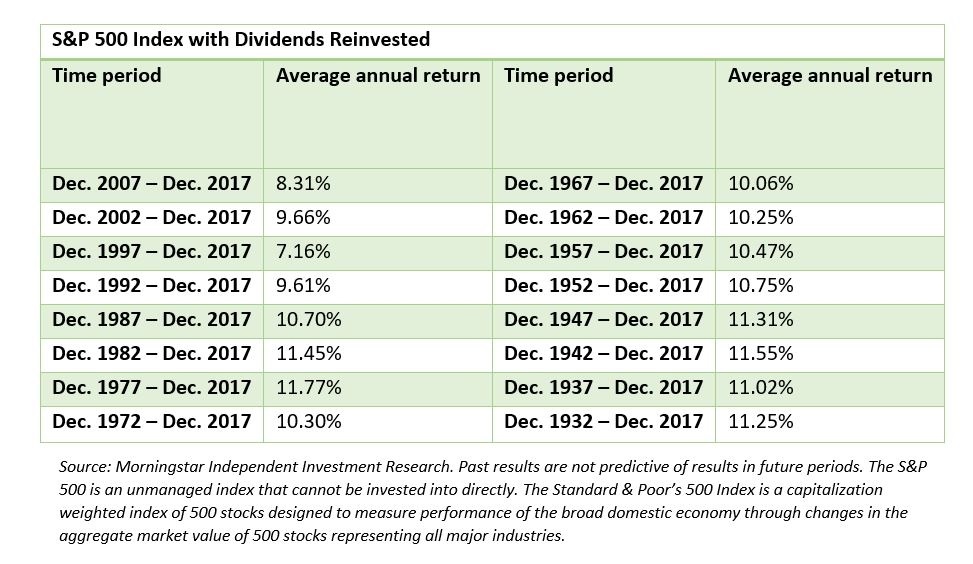 You may find the chart above of interest. Find the closest year to when you were born and notice the S&P 500 average annual returns to the end of 2017. Despite political upheavals, wars, economic crisis, global problems and even the Great Depression, time has rewarded investors.

The key to seeking favorable investments outcomes is to keep your eye on the end goal – which, ideally is to be able to enjoy your quality of life today as you also prepare for the future. If we use our resources wisely and embrace the fact that we are all investors-for-life, perhaps we might be better equipped to withstand market drops and future recessions. Finally, keep in mind that by definition, a recession is a decline in GDP over two consecutive quarters. Consequently, by definition (based on history), when economists finally agree on the state of the economy, the recession may already be half-way over. And often, the worst of the market decline has already passed when a recession hits. While many are fearful, for sure, the past two recessions have not been indicative of the historical average or typical recession.

In closing, let me remind you of the words from Peter Lynch (formerly with Fidelity): “Invest with your head, not your stomach.”

Content in this material is for general information only and not intended to provide specific advice or recommendations for any individual. All performance referenced is historical and is no guarantee of future results. Stock investing involves risk including loss of principal. The economic forecasts set forth in this material may not develop as predicted and there can be no guarantee that strategies promoted will be successful.