March Chart of the Month

With the U.S. stock market already with positive double digits for the year, investors may be wondering where we go from here. The storm clouds that pulled down the markets at the end of 2018 – rising interest rates, government shut down and trade wars – have eased, paving the way for potentially more economic growth despite the fact that this is now the longest expansion on record.

It’s easy to feel optimistic when the markets are rallying.

While it's easy to remain invested when the markets are rallying, it’s also normal to feel fear and anxiety when the sentiment changes. What we’ve learned from history is that sharp market corrections tend to be followed by “v-shaped” recoveries, which we may very well be seeing right now. In fact, since 1926, when stocks have fallen -10% to -20% from a recent high, the returns during the next 12 months have averaged 34% excluding dividends. After bear markets (when stocks decline -20% or worse from a recent peak) you may be surprised to know the next 12 months tend to average +47%.

There’s also precedent for bear markets in history that happened without an economic recession, which one could argue is what we just experienced in the final quarter of 2018. In those cases, the market averaged +29% in the next 12 months.Either way, the outlook for 2019 continues to look more favorable, particularly if a trade deal with China can be met by end of March. Bloomberg reported U.S. trade negotiators are preparing a final deal with China that could be signed in the coming weeks, finalizing an agreement that would end the year-long trade war.

Having said that, we know recessions are a normal part of the economic cycle and investors should be prepared for the next recession, despite the positive market rally we are enjoying today. At this point in the cycle, anything can trigger a change in sentiment and adversely impact consumer and/or corporate spending. This brings me to the chart of the month.

Bear markets are a part of every economic recession.

Market drops are a part of every recession; however, if we look at the chart below, we can see that although the average bear market decline has been -33% since 1949, bull markets have averaged +263%, lasting for 71 months compared to the average 14 month period of decline during the recession.  In other words, investors have historically been nicely rewarded for tolerating 14 months of economic decline. 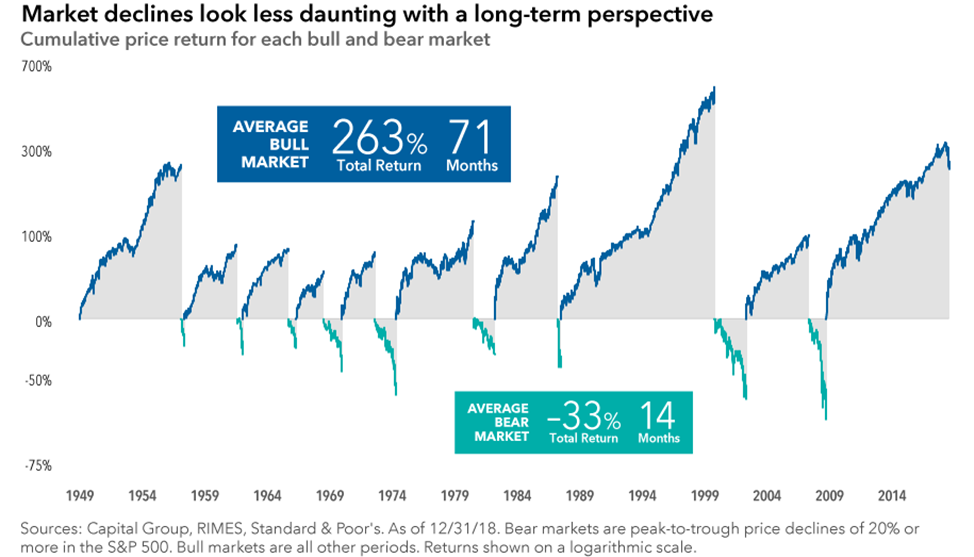 Many of you may remember the tech bubble of the 1990s. Recently, I did some estimations. In 1996, I purchased my first house for $210,000. Today, that same home has an estimated market value of about $600,000, which is a pretty typical price for starter homes in LA today. Out of curiosity, I ran a comparison of the performance of an actively managed stock mutual fund and guess how much the market value would be today? $1.3 million! This, of course, after weathering two major market declines.  (This is a hypothetical example and is not representative of any specific situation. Naturally, your results will vary and the hypothetical example does not reflect the deduction of fees and charges typically inherent to investing).

I’m reminded of the story of two monkeys. One monkey was given an apple and he proceeded to eat it, merrily playing in his cage. The other monkey was given two apples, but then one was taken away. He thrashed about his cage and threw a fit. I understand we don’t like to lose money. No one wants anything taken away from him. But now may be a good time to remind you that when it comes to investing, we must accept that it is a normal part of the investment process.

If you seek to grow your wealth and try to offset the rising cost of living or support today’s longevity risks, the cost of this pursuit will likely be the occasional forsaking of the beloved “apple.” And while you may want to react like the monkey, with anger and rage, I encourage you look at the bigger picture. History teaches us that the apple tree will continue to bear fruit, even if it occasionally goes dormant, loses all of its leaves and appears to be withering away.

I encourage you to enjoy the strong gains and welcomed respite from the volatility. But don’t let it lull you into a false sense of security.

The opinions voiced in this material are for general information only and are not intended to provide specific advice or recommendations for any individual. All performance referenced is historical and is no guarantee of future results. All indices are unmanaged and may not be invested into directly. All investing involves risk including loss of principal. No strategy assures success or protects against loss. The economic forecasts set forth in this material may not develop as predicted and there can be no guarantee that strategies promoted will be successful.